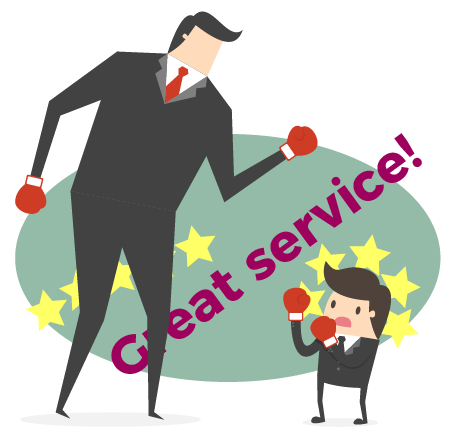 Many of our customers use Reviews.co.uk. We use it ourselves.

What’s more, its licensing agreement with Google means that ratings collected via Reviews.co.uk can appear both in Google search results and on your Google My Business panel.

But many customers ask why they should use it instead of a free service like Google reviews.

In most people’s minds, Google are clearly the leader in review collection race and the number of reviews on Google vastly outweighs those collected by most other services. One study suggests that 74% of all businesses have at least one Google review.

You set the percentage of how many reviews you want to collect via each service. Review requests will then be randomly split across these services in the proportion you choose.

This is a good way to automate the building of a review presence across multiple platforms.

What’s more Google reviews are free to use for both the customer and the business.

Google reviews might be free of charge but they offer a somewhat lower level of trust than other review services. For the business owner, Google reviews are the most visible online, but it is not quite as easy to control who is reviewing you.

Also, users find that using Google reviews is not always as easy as other services, despite the recent improvements Google have made to the review collection process.

Above all there are significant differences in the average ratings between Google reviews and other independent review services.

We surveyed up to 100 different business who collect reviews both on Reviews.co.uk and on Google. We found that the average rating on Reviews.co.uk was 4.83 out of 5, whereas on Google it’s 4.37. That’s a difference of almost 10% in satisfaction levels between Reviews.co.uk and Google. We put this down to to the more open and anonymous style of Google reviews – everybody knows that most businesses have a My Business page that customers can leave reviews on.

There’s also a bias towards Reviews.co.uk in terms of the number of reviews collected. Businesses we looked at collected on average 259 reviews on Reviews.co.uk vs just 51 reviews on average on Google. Clearly those paying for review collection take it a bit more seriously!

So let’s look at the factors involved in making a decision between using the two services and see what the considerations are.

On the face of it Google reviews seems to win hands-down. Their reviews are far more visible, easy for customers and widely known.

But there are differences for businesses in collecting reviews via Google. And most importantly Google reviews seem to attract more negative reviews than services such as Reviews.co.uk.

It might be worth spending a little bit more money to have more control over your review service, if your reputation is important to you.

Note: we are not affiliated with Reviews.co.uk nor are we part of any agency scheme with that company.